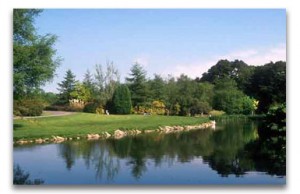 Dedicated to the memory of John Fitzgerald Kennedy, President of the United States from 1960 to 1963, the Arboretum is a plant collection of international standing. It covers 252 hectares (623 acres) on the southern slopes and summit of Slievecoiltia. It contains 4,500 types of trees and shrubs from all temperate regions of the world, planted in botanical sequence. There are 200 forest plots grouped by continent. Special features include an Ericaceous Garden, (with 500 different rhododendrons, and many varieties of azaleas and heathers), dwarf conifers, hedges, ground covers and climbing plants. The lake is the most popular part of the Arboretum, and is a haven for waterfowl. A road provides access to the summit at 271m from which there are panoramic views. A Visitor Centre houses exhibitions and audio visual show. Access for people with disabilities. 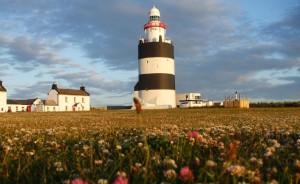 Light up your day at Hook Lighthouse, 800 years of light keeping. One of the Oldest Lighthouses in the World, a favourite with Lonely Planet and Tripadvisor. Marking the entrance to Waterford Harbour at the mouth of the Three Sisters river system for over 800 years. The Visitor centre which is open year round at Hook Lighthouse and offers guided tours of the Medieval lighthouse tower, built by William Marshal, the Earl of Pembroke and the most famous Knight of his time, as part of the development of his Lordship of Leinster. Purpose built as a lighthouse 800 years ago, and still fully operational today, Hook Lighthouse truly is one of a kind! Guided tours take you through the lighthouse with fascinating insights, stories and facts of this unique building. Enjoy the spectacular view from the balcony. Our Visitor Centre located in the former keepers houses where there is a first class gift shop, café and bakery. Our friendly staff are happy to help with any tourist information you require. 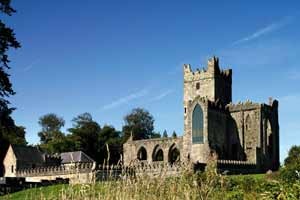 The Earl of Pembroke founded Tintern Abbey just 16km south of New Ross in about 1200, when, during a treacherous journey on ship, he vowed to establish an abbey if he reached land safely. The abbey is thus often called Tintern de Voto, or Tintern of the Vow. It was colonised by the Cistercian monks from the abbey at Tintern, Wales, of which the Earl was also a patron. Today, visitors to the lovely County Wexford site can view the remains of the nave, chancel, tower, chapel and cloister. They can also participate in 45-minute guided tours of the property, which, in the 16th century, became living quarters for the Colclough family. Tintern Abbey is located 16km south of New Ross off the R734 road or 29km from Wexford off the Wexford to Ballyhack road R733. 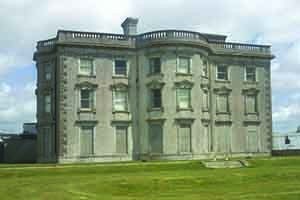 Loftus Hall is a large mansion house on the Hook peninsula, County Wexford, Ireland. It is said to have been haunted by the devil and by the ghost of a young woman. The Redmond family built the original house in 1350 during the time of the Black Death. It replaced their original castle at Houseland near Portersgate. The Hall became the property of the Loftus family in the 1650s as a result of the Cromwellian confiscations and this was confirmed after the Restoration of King Charles II of England by the Act of Settlement 1662.The building that exists today was heavily renovated between 1870 and 1879 by the 4th Marquess of Ely. In 1917 Loftus Hall was bought by the Sisters of Providence and turned into a convent and a school for young girls interested in joining the order. In 1983, it was purchased by Michael Deveraux who reopened it as “Loftus Hall Hotel”, which was subsequently closed again in the early 1990s. It was privately owned by Deveraux’s surviving family until late 2011, when it was sold to its current owners, the Quigley family from Carrig on Bannow. 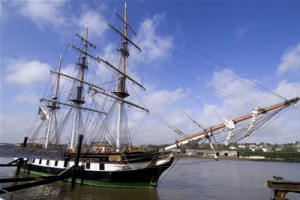 Dunbrody Famine Ship is one of the premier tourist attractions in the South East of Ireland. Centred on an authentic reproduction of an 1840’s emigrant vessel, it provides a world-class interpretation of the famine emigrant experience. Incorporating guided tour, costumed performers and themed exhibitions of the highest quality, ‘The Dunbrody’ provides a unique insight into the bravery and fortitude with which Irish people faced up to a desperate situation. As well as the Ship’s Tour, the Dunbrody Visitor Centre houses a charming river-view café and the Irish America Hall of Fame. The Hall of Fame commemorates the critical contribution of Irish men and women to US history, as well as acknowledging the continuing contribution of contemporary Irish-Americans. Each year the Hall of Fame inducts new members; most recently Donald Keough, Michael Flatley and Maureen O’Hara. The attraction is located in New Ross, County Wexford. Central to the South East, New Ross is conveniently close to the towns of Wexford, Kilkenny, Waterford and Enniscorthy. 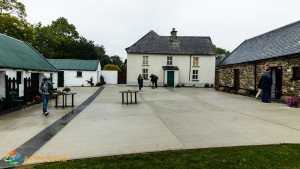 The Kennedy Homestead, a unique cultural museum is dedicated to “the Kennedys who went away and the Kennedys who stayed behind” and plays a vital part in the continued preservation of the Kennedy legacy in Ireland. The curators of the Kennedy Homestead Visitor Centre, using the Kennedy Library archival collection in Boston, have created a state of the art interpretative exhibit which explores the circumstances of Patrick Kennedy’s departure from Ireland in1848 and pieces together the story of the most famous Irish–American family through the 20th century to the present day. The Kennedy family legacy is an integral part of daily life in Co. Wexford. Facilities at the Homestead include a unique collection of Kennedy memorabilia, audio-visual display, souvenir shop, picnic area, wheelchair access and extensive car and coach parking facilities. 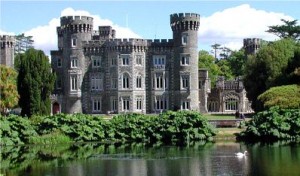 The spectacular ornamental grounds and gardens surrounding the 19th century castle were designed by Daniel Robertson who is famed for the gardens at Powerscourt in Co. Wicklow. Johnstown Castle estate has been home to two prominent Wexford families. The first owners were the Esmondes; a Norman family who settled in the county in the 1170s. They constructed the tower houses at Johnstown and Rathlannon during the 15th or 16th century. During the Cromwellian period of 1640s the estate was confiscated and changed hands several times before being acquired by John Grogan in 1692, whose descendents remained at Johnstown up until 1945. In this year Maurice Victor Lakin presented Johnstown Castle estate as a gift to the Nation. By 1863 Johnstown Castle estate was at its peak of development and comprised of a large demesne of over 1,000 acres. It was divided in two with a deer park to the north, and the castle, pleasure grounds, home farm and two lakes (with a third lake under construction) to the south. Today Teagasc, the Agricultural and Food Development Authority, is the owner of the Johnstown Castle estate and has a research facility on site.